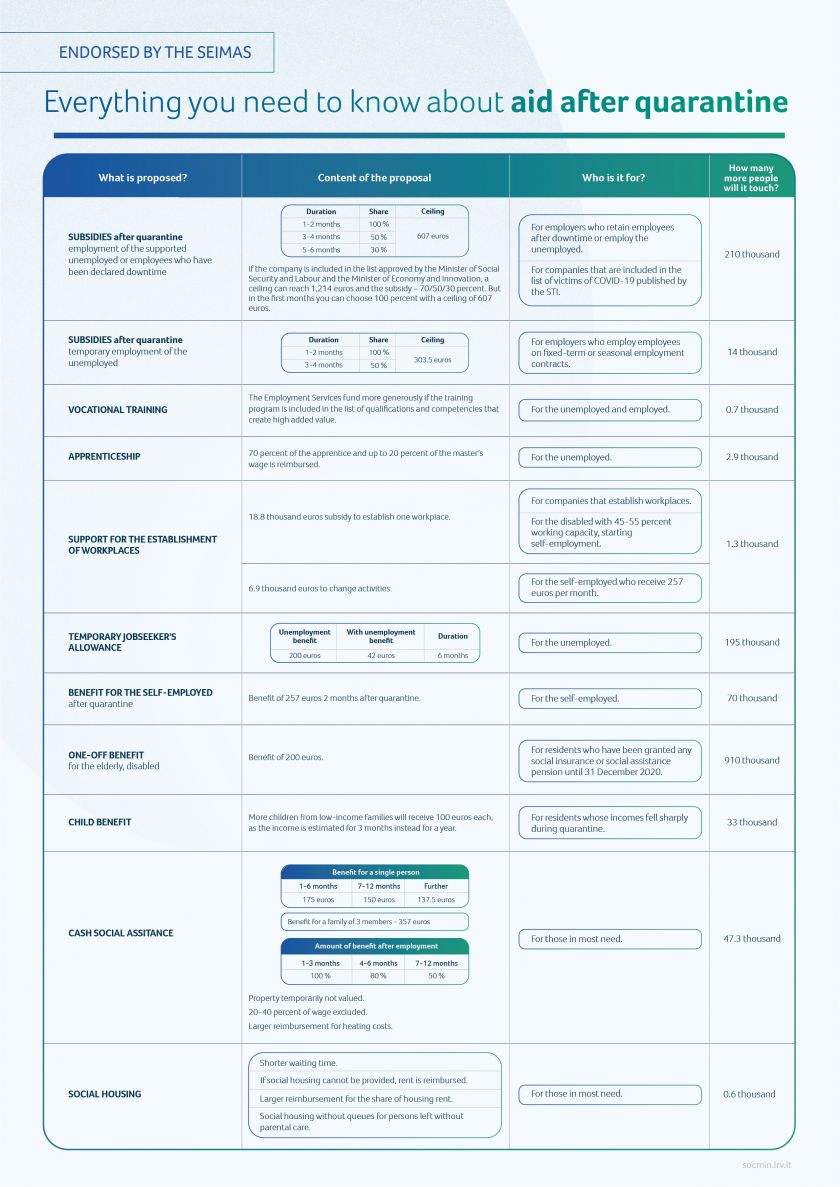 The Seimas approved special aid and support measures for employees, the self-employed, people who lost their jobs and employers after quarantine. Most of these measures will be applied temporarily, until the country succeeds in recovering from the shock of the coronavirus pandemic. However, social benefits as well as reimbursement for heating costs will be increased over the long term.

According to the decision of the Seimas, employers will be able to expect subsidies for retaining employees for another six months after quarantine, self-employed persons will receive a benefit of 257 euros two months after quarantine, people who have lost their jobs will be able to receive a temporary jobseeker’s benefit even if they are not currently entitled to unemployment benefit, each child from large low-income families will receive 100 euros, recipients of old-age pensions, disability pensions and other social insurance pensions and benefits will be able to receive one-off benefit of 200 euros.

It is estimated that about 1.4 million people will benefit from the measures proposed by the Government. In total, this will require up to 1 billion euro.

„Lithuania has not yet had a situation where the whole economy stops for a while due to the need to protect against the spread of the virus. Although quarantine is already being mitigated, we will continue to have to be careful, which will have a direct impact on the behaviour, work, leisure and consumption habits of the population. For this reason, the Government has proposed and the Seimas has approved a package of aid measures that will help after the cancellation of quarantine. All these decisions will contribute to the retention of employees in the labour market, will help companies to retain employees, will increase support for the poor, unemployed, elderly, disabled or families whose incomes have fallen sharply,“ says Linas Kukuraitis, Minister of Social Security and Labour.

Subsidies for employees and their employers

SUBSIDIES. At present, the country provides wage subsidies to employers who declared downtime and pay at least the minimum monthly wage when the full-time rate is agreed.

Employers have already been paid 19 million euros of subsidies, and companies in turn pay employees wages during downtime.

Subsidies to pay employees’ wages will be granted to the employers who:

Subsidies after quarantine will normally reach 100-30 percent from the wage accrued to the employee, but not more than 607 euros gross.

In the first two months, 100 percent subsidy would be paid, the other two – 50 percent and in recent months – 30 percent, but not more than the minimum wage. In total, the subsidy could be paid six months after quarantine.

If the company is included in the list of activities approved by the Minister of Social Security and Labour and the Minister of Economy and Innovation, focusing on the production of advanced technologies, knowledge-intensive business services, the pursuit of green deal goals and social dialogue, then it will be able to benefit from larger subsidies.

For the next two months, the subsidy will be able to reach 50 percent, for the remaining two – 30 percent, but not more than a ceiling of 1,214 euros.

In case the company is not in a hurry to employ long-term employees and tends to conclude fixed-term or seasonal employment contracts, the subsidy will reach 100-50 percent, will be paid for only four months and not more than 303.5 euros gross.

Aid in returning to the labour market

ONE-OFF SUPPORT FOR THE ESTABLISHMENT OF YOUR WORKPLACE. In Lithuania, the Employment Services provide one-off support to the population groups provided for in the Law on Employment for the establishment of their workplace in a very small enterprise – the support can reach up to 18.8 thousand euros. At present, such support is available to the unemployed with the most severe or moderate disabilities, as well as to the young unemployed under the age of 29 and over the age of 45.

On Thursday, the Seimas approved that such support for self-employment should be provided to the unemployed who have been diagnosed with a mild disability or 45-55 percent working capacity.

The Parliament also approved a proposal to allow the self-employed, who receive a temporary benefit of 257 euros for a month, to change their economic activity – one-off subsidy of around 7,000 euros from the Employment Services may be granted for these people.

Such support shall give priority to projects that provide the establishment of workplaces in territories of the highest unemployment, seek to employ additionally supported people – such as the disabled, younger or elderly, long-term unemployed – involve the local community, have the opportunity to be remunerative and other funds contribute to the project.

It has been agreed that companies will not be required to provide a letter of guarantee when one workplace is established or when more workplaces are established during emergency and quarantine and for another 3 months thereafter.

APPRENTICESHIP. When employing an employee under an apprenticeship contract, it was agreed to facilitate the requirements for employers. An apprenticeship contract will allow the employer to hire an employee, train him or her in practical and theoretical professional knowledge, and receive the reimbursement for 70 percent wage from the Employment Services, but not more than 910.5 euros gross.

In addition, the wage of the master craftsman appointed by the employer will also be partially reimbursed, but not more than 20 percent and not exceeding the minimum hourly wage rate.

VOCATIONAL TRAINING. The Seimas also agreed more generously to promote vocational training for employees and the unemployed, with the aim of acquiring qualifications and competencies that create high added value.

The Employment Services still fund vocational training when the unemployed apply for a job, start self-employment, or when the employed aim to change their profession, job.

A new benefit for people who have lost their jobs

However, only about a third of the unemployed registered with the Employment Services are entitled to unemployment social security benefit, and those who are entitled to this benefit, but at the end of its payment period, have difficulty finding a job due to the pandemic.

In order to protect those who have lost their jobs from a sudden drop or loss of income, it is proposed to introduce a temporary jobseeker’s allowance. The new benefit would be paid for a maximum of 6 months, but no longer than until 31 December 2020.

For the self-employed – benefit for 2 months after quarantine

EXTENSION OF PAYMENT OF THE BENEFIT. During quarantine, the self-employed are entitled to a monthly benefit of 257 euros, whether or not their activities were restricted during quarantine. On Thursday, the Seimas approved the decision to pay this benefit for another two months after quarantine.

The self-employed may receive the benefit if they meet the following criteria provided for in the Law on Employment:

The self-employed are considered to be owners of sole proprietorships, members of small partnerships, full members of partnerships and limited partnerships, persons engaged in individual activities (including business certificates), farmers and their partners with a holding of 4 ESU or more, family members, persons receiving income under copyright agreements or income from sports or performer activities.

Please note that a flat-rate benefit from the Employment Services is available to all self-employed with business certificates, including people engaged into rental of premises.

One-off benefit for the elderly and disabled

It is intended to grant one-off benefit of 200 euros to the elderly, disabled, widows and orphans.

This benefit belongs to people who is or will be granted at least one of the following benefits paid by Sodra until 31 December 2020: old-age, invalidity pension, widow’s, orphan’s or survivor’s pension, retirement pension, reimbursement for special working conditions, social assistance benefit or reimbursement, as well as pension, designated under international agreements or European regulations.

If a person starts receiving any of these benefits in September and later, he or she will receive one-off benefit in the same month as the awarded pension or social assistance benefit.

For those in most need

CASH SOCIAL ASSISTANCE. Stopped activities during quarantine have the greatest negative impact on the poor, therefore, the Seimas agreed to expand the number of people who could receive cash social assistance, to increase the amount of social benefits, to provide more support for single persons, to pay higher benefits after employment, and to reimburse for a larger share of housing heating costs.

What specifically is offered:

All these provisions will remain in force after the revocation of emergency and quarantine, except for the temporary non-valuation of the property for six months after quarantine.

CHILD BENEFIT. A child benefit of 100 euros with a supplement is paid to disabled children, as well as to children from large or low-income families. A low-income family is considered to be one in which the average monthly income per family member does not exceed 250 euros, excluding the child’s own money and part of the wage. However, a period of 12 months is currently taken into account when estimating family income.

The Seimas agreed that when estimating the income of a poor family, the income of 3 months will be taken into account instead of 12.

The Seimas agreed that when estimating the income of a poor family by granting an additional child benefit, the income received from 1 April 2020 will be taken into account instead of 12 months.

From July, the income of the last 3 months will already be estimated.

Such facilitation will enter into force upon signing the legal act by the President and will remain in force for another 6 months after emergency and quarantine. About 33 thousand children should receive larger child benefits.

HOUSING. In the field of social housing, waiting time for social housing are shortened initially to 5, then to 3 years. If at the end of the term the municipality is not be able to provide social housing for an individual or a family, then it will have to reimburse for the actual rental price of suitable housing rented on the market.

At the same time, the minimum basic amount of reimbursement for the part of the housing rent is set – from 23 to 32 euros per month per person, when the useful area of the housing per person or family member is 10-14 square meters.

For persons left without parental care, who have left their social care, group living or independent living homes (if they do not have another housing in Lithuania), social housing will be provided out of order.

These changes to housing should continue after emergency and quarantine. 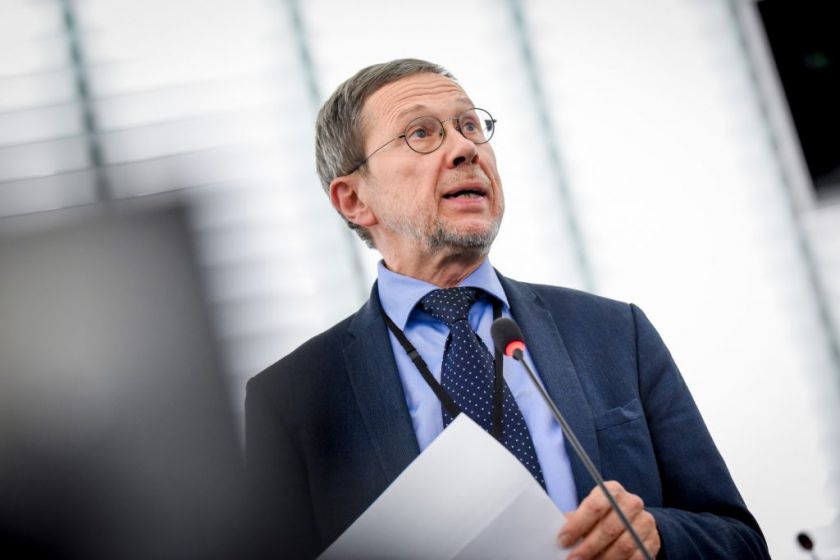